In the spirit of the Yuletide season, Nutricima Limited has rewarded some consumers who emerged winners in the 'Blue Santa Selfie Challenge,' a Facebook competition which required participants to take a selfie picture imitating the pose of Olympic brand Ambassador, Peter Okoye. 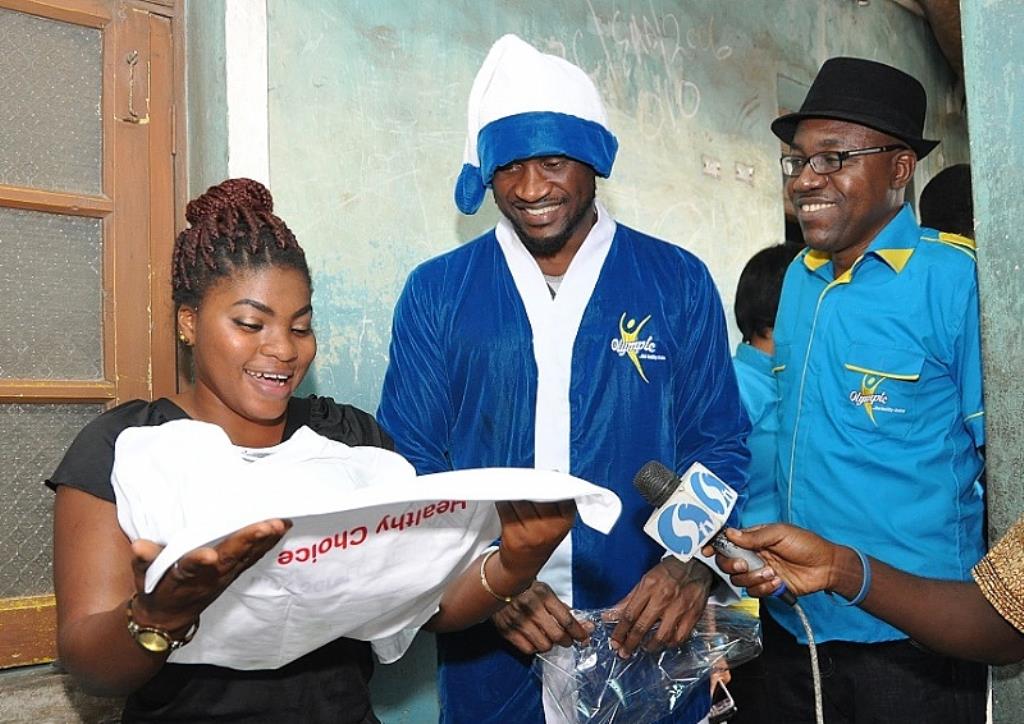 In the spirit of the Yuletide season, Nutricima Limited has rewarded some consumers who emerged winners in the ‘Blue Santa Selfie Challenge,’ a Facebook competition which required participants to take a selfie picture imitating the pose of Olympic brand Ambassador, Peter Okoye.

The winners were selected based on the numbers of likes for the selfie pictures on the Facebook page and the creativity of the pose. A total of 10 consumers emerged winners in the Blue Santa Selfie Challenge and they were rewarded with gifts and a special surprise visit by Peter Okoyo who was dressed as the Blue Santa.

Speaking on the reason behind this initiative, Category Marketing Manager, (Standard Milk), Nutricima, Mr. Raphael Agbaje, stated that Christmas is a season for caring and sharing, the brand decided to give gifts that will make the season memorable for its consumers..

He added that Peter Okoye, the Blue Santa, was basically the surprise gift for the winners who wouldn’t have believed that he will go door-to- door to pay them a visit with some cartons of Olympic products.

Wishing the consumers a Merry Christmas and a Prosperous New Year, Agbaje enjoined them to look out for more pleasant and rewarding activities in 2015.

Despite the heavy downpour on that day, Peter ensure that he fulfilled the brand’s promise of delivering the gifts – cartons of Olympic evaporated Milk, Apple flavoured Olympic and autographed branded V-neck shirts to the winners.

Surprised to see the popular Hip Hop Star at their homes, most of the winners instantly welcomed Peter with hug and high excitement.

Yetunde Ifakoya, who resides at Ibadiaran Street, Maryland, Lagos, couldn’t contain her joy as soon as she saw Peter. In her words: “I never believed I will get a prize not to talk of seeing Peter himself in my house. Though, I got a call from one of the staff at Nutricima, I still told myself until I see it happening, I won’t bother,” she said gleefully.

For Joy Orji, a quality control staff of BIC Biro, the Blue Santa took her by surprise at her work because she was on duty. The excitement was dramatic. She was asked to face the wall and turn at the count of ten. Immediately she turned, she ran to give Peter Okoye a bear hug, overwhelmed with excitement, she couldn’t speak for few minutes as it took some time to regain her voice.

According to her, she believed it from the outset, but thought she might have to forfeit the surprise visit since she had to be at work on Sunday. Still in the rain, Nutricima officials called her to ask for her office address to fulfil its promise.

She said this was her best Christmas gift considering the nature of her job and her quiet mien; which does not allow her attend clubs or shows which could have afforded her opportunities to see Peter. Thanking Nutricima for bringing the Blue Santa to her officer, she said: “This is once in a lifetime opportunity.” She hurriedly asked her colleagues to take as many shots as possible with her phone.

Tunde Popoola, the first male winner visited by Blue Santa, works as a site manager/store keeper and resides in Egbeda area of Lagos. He was so excited that he invited Peter Okoye into his living room and served him a bottle of Apple flavoured Olympic drink. He took selfies with Peter screaming : “This is real, Peter Okoye in my house, on my settee!” Taking as many selfies as possible, he stated that he will post it on his social media pages to prove to people that they are not Photoshop pictures.

Olympic Blue Santa also visited Darlington Nnamani at Abule Egba. Though it was already dark, his family members trooped out to get a hug from Peter Okoye. Winner of Blue Santa Selfie Challenge, Yetunde Ifakoya, looking at her autographed shirt in excitement as the Blue Santa and Olympic Milk Brand Ambassador, Peter Okoye of PSquare, presents her an autographed shirt and cartons of Olympic Milk at her residence as part of Nutricima Limited’s activity to celebrate the season with consumers. With them is the Category Marketing Manager(Standard Milk), Nutricima Limited, Mr. Raphael Agbaje.