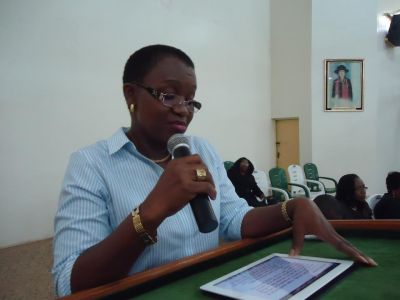 Barrister Nwanneka Okolo, founder of the foremost capacity building and skills development NGO in the South East, Lift Saxum, has been nominated a UN Women Empower Women 2016-2017 Champion for Change.

Mrs. Okolo is one of 170 persons the UN Empower Women found worthy from over 4000 applicants from across the world. There are about 21 Nigerians on the list.

Lift Saxum is a non-profit organization established to transform the enterprise development landscape and the lives of youth and women in Nigeria, with a focus on the South East. Lift Saxum operates from New Haven, Enugu. Since incorporation in 2013, the organization has trained over 64 youth and women on their flagship programmes, Start Your Own Business (SYOB) and Enterprising Women (EW). It has trained 80 rural women on the Songhai Integrated Farming techniques, home craft, and life skills. It also sensitized and trained over 300 secondary school pupils on skills acquisition.

Okolo is a barrister, former Business Development Manager and Group Head Public Sector Business, Enugu/Ebonyi at First Bank. She is an alumnus of the Obafemi Awolowo University and the Lagos Business School. She is also an entrepreneur.

Nigerians featured prominently on the list of Global Champions, accounting for 12 percent of the awardees.

At least two Nigerians appear under the United States and Ireland nationality.

UN Women’s Empower Women said the nominees represent “a diverse group of dynamic and enthusiastic women and men from the private sector, civil society, academic and national and international organisations from both developing and developed countries.”

In a statement, the UN Empower Women said: “The nomination of the 170 Champions is the result of a month-long online rally with almost 4,000 applicants from all over the world. They campaigned and advocated for women’s economic empowerment by participating in several online activities on EmpowerWomen.org and social media.  As part of the rally, the selected champions have contributed extraordinary stories and resources, and substantive inputs to various online initiatives.

“Over the next four months, the Champions will work in three groups: (1) Advocacy and Social Media; (2) Business Development and (3) Skills Development. They will serve as Empower Women advocates for women’s economic empowerment both online and in their local communities. They will be involved in a series of innovative initiatives such as expanding the Organizational Hub, piloting   the Financial Literacy course, and participating in the #BreakTheGlass and #HERstory campaigns.”

The UN Empower Women was launched on 23 September 2013 during the High-Level session of the United Nations General Assembly by Phumzile Mlambo-Ngcuka, Under Secretary General of the UN and Executive Director of UN Women, and Lynne Yelich, Minister of State, Foreign Affairs and Consular, Government of Canada.

Since then, Empower Women has grown into a global movement with more than half a million viewers and over 12,000 passionate and ambitious women and men from the private sector, civil society, academia, governments and international organizations more than 190 countries. Empower Women has also cultivated a global network of 250+ dynamic, influential Champions for women’s economic empowerment from over 60 countries.